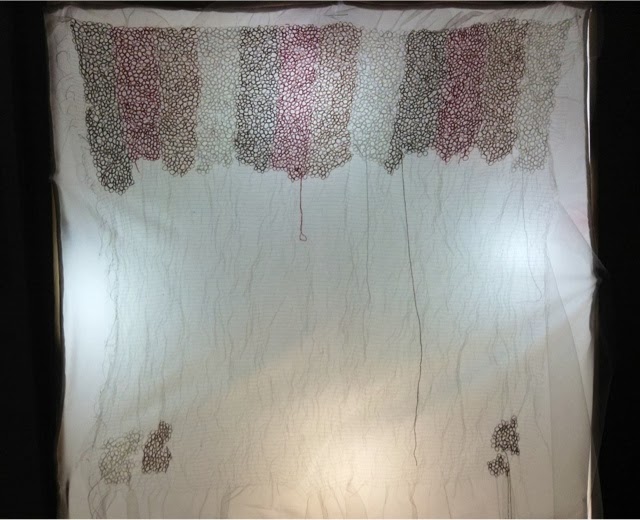 This is one of the pieces I'm currently working on. I'm very happy with the way it's going.

I learned recently about a repulsion some people feel towards groupings of holes. It's called "trypophobia." I read the remarks of people who are revolted by this sort of thing (honeycombs, lotus seed pods) and I think it's pretty certain my work would be a "trigger" for them. People who have trypophobia are often told it is not a phobia because they don't fear the clusters of holes; instead they find them repulsive and yet at the same time often feel compelled to look (and sometimes even to search out these images).
I think I feel something of that response, which is why I make my work. I don't feel the repulsion at all, but I do feel an instinctual response when I look at my work, and I do feel that it invites me to keep looking.
When I first learned about trypophobia, I was shocked. I couldn't imagine anyone finding my work (or honeycombs for that matter) repulsive. I don't know why I'm so entranced by the circles I make on tulle fabric, and I don't know why others might find them disgusting.
Petronius Jablonski writes about trypophobia at http://trypophobiac.wordpress.com/. Here he refers to theories about the reasons for trypophobia:

"I'm not persuaded by the recent scientific explanation. Trypophobia is existential dread. A hole is a package of nothing, a conspicuous manifestation of non-existence surrounded by existence. It is the physical occurrence of the two most fundamental metaphysical categories side by side. There is no missing link or shades of grey between Something and Nothing. The contrast is bewildering and haunting. It inflicts, at some primal level, the ultimate question: Why is there anything at all rather than nothing? These patterns are metaphysical symbols of ourselves. We are perched on the mysterious ledge of existence, soon to tumble into nothingness. Seeing dozens of holes is like some otherworldly chorus screaming this. It’s like looking into a mirror that shows our essence."

The lines I make on the fabric before I make my images (a step I think of as "preparing my canvas," as painters do with gesso) have something to do with the answer. These lines are made with white cotton thread and they supply both the order and the chaos that underlie the finished work. Making these lines is very time-consuming, as they are sewn by hand. Yet, even if they can't be seen, or can only be seen very faintly, in the finished piece, they are essential to it. I'm still thinking about the best way to say this, but the lines are key to why I disagree with Jablonski's conclusions.

It may be best not to put it into words and to let the work speak for itself.
Posted by Unknown at 9:46 AM