How to Grow Plants at School

A few years ago, when I was teaching first grade, I started out the first week by telling the children stories. It's very difficult and very important at the beginning of school to get the full attention of every child in the class. I found that telling stories, rather than reading them, helped me to maintain the students' attention at the beginning of the school year. Of course, later I read them hundreds of stories.
So the first week of school, I told them the story of Jack and the Beanstalk. This took more than one day. The kids were excited to hear the next part of the story, and they especially enjoyed my giant voice (which I put a lot of effort into!). The trick to telling stories is that you really have to memorize them, and know a lot of details. So I would spend an hour the night before reviewing the story and practicing. It was worth it.
After I finished the story, I asked them if they thought beans were magic? What would happen if we planted them in a bag?
They mostly said that beans were not magic and that nothing would happen to these pinto beans I showed them if we put them in a bag with a wet paper towel. So I suggested that we color some of them and sing to them to make them magic, and see if that would work. 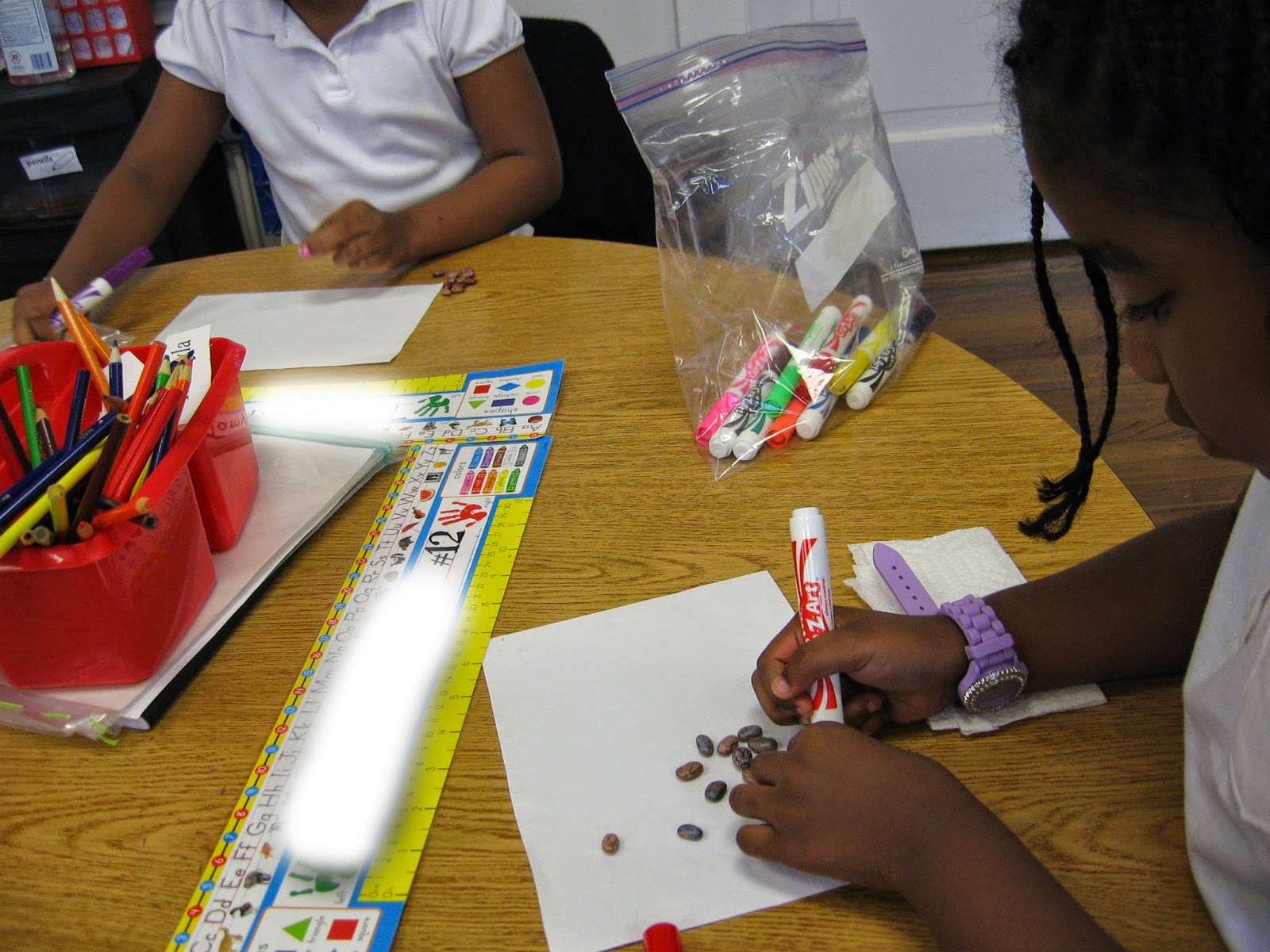 I made up a silly chant: Circle circle, Green green, Now you are a magic bean! I told them to say this chant to the beans as they colored. 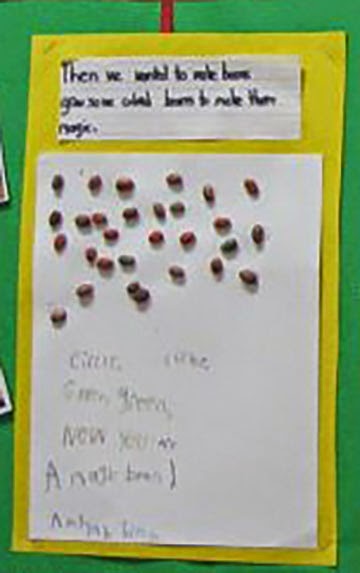 Coloring so many beans kept them busy for a few minutes, giving me time to get the bags ready. (Hey, it also helped them develop their fine-motor skills!). After we put them into baggies labeled with each child's class number, we drew pictures predicting what would happen to them. Some thought that the beans would look like this the next day: 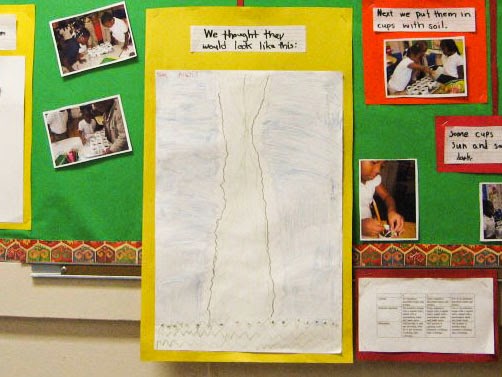 The kids were very interested to see the seedlings the next time we checked on them: 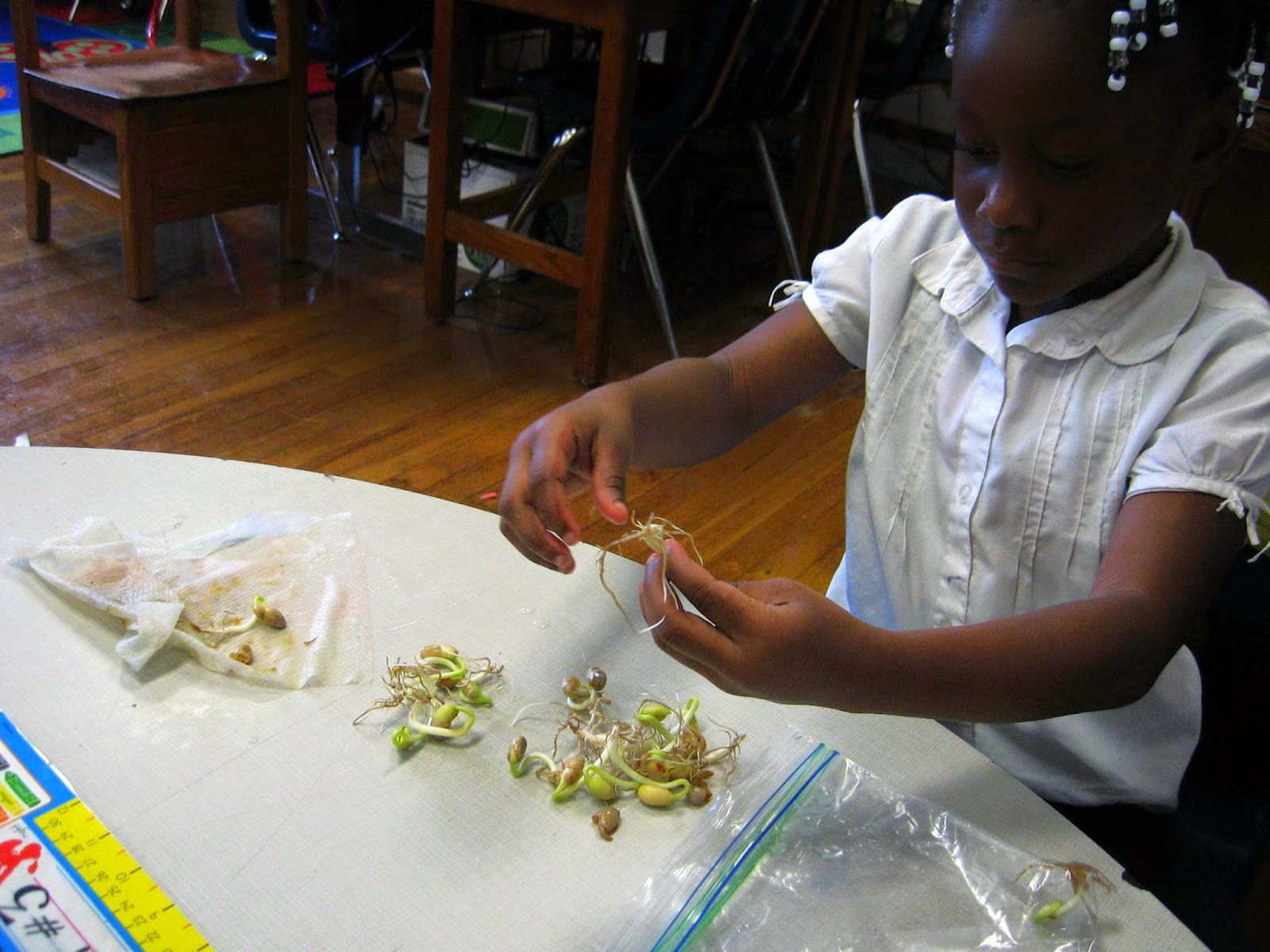 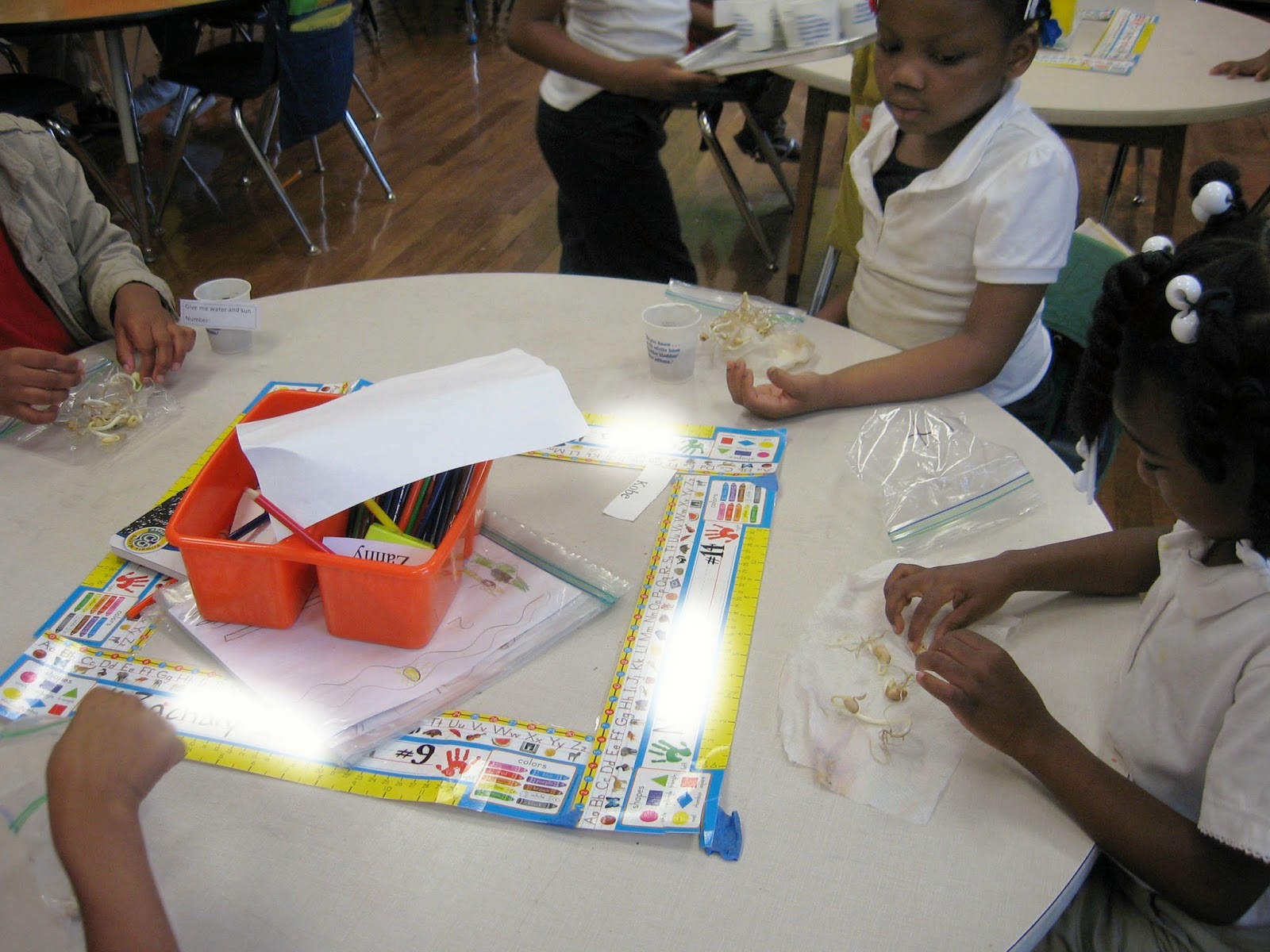 When we had a lot of viable seedlings, we put them into cups. 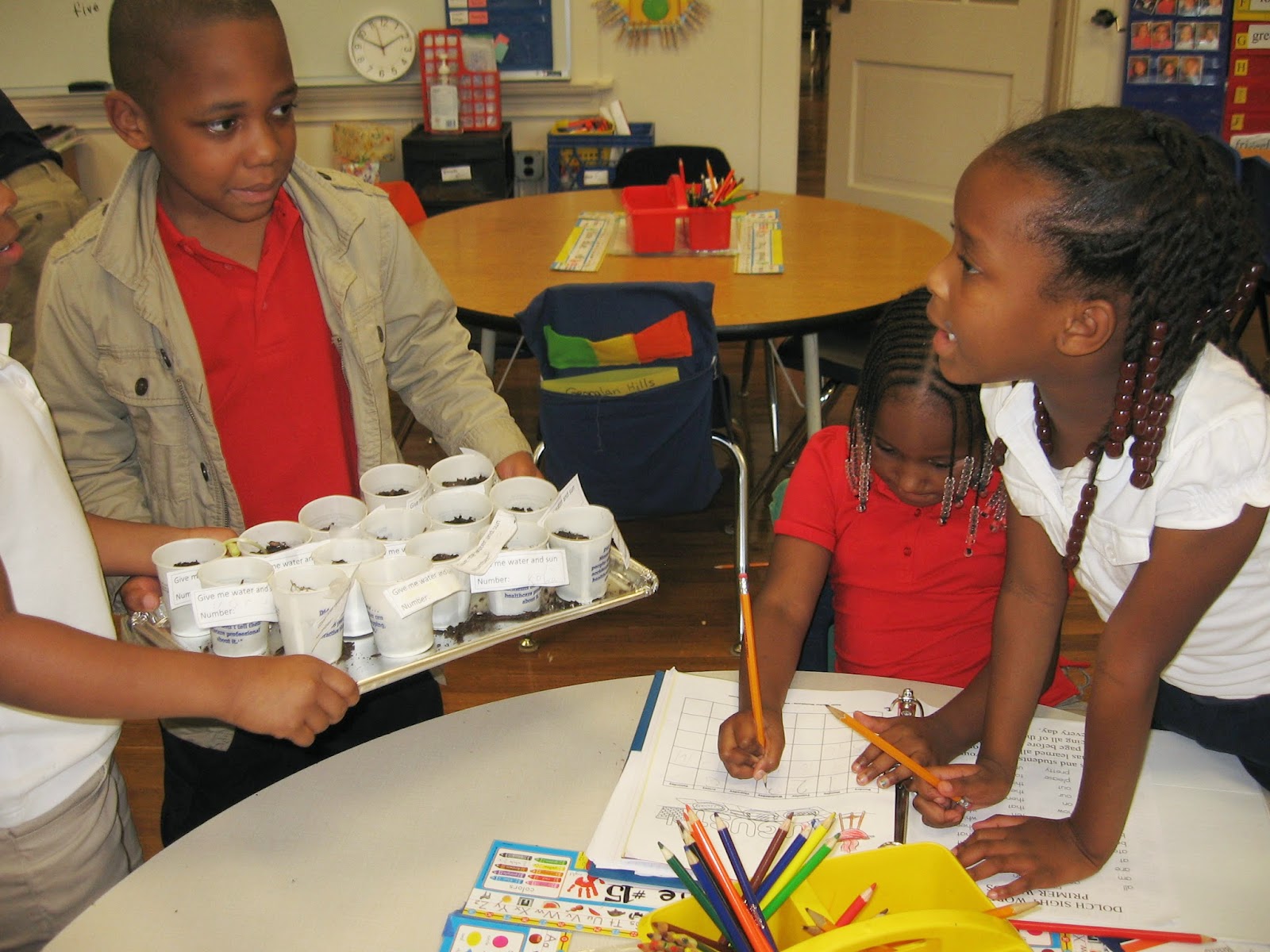 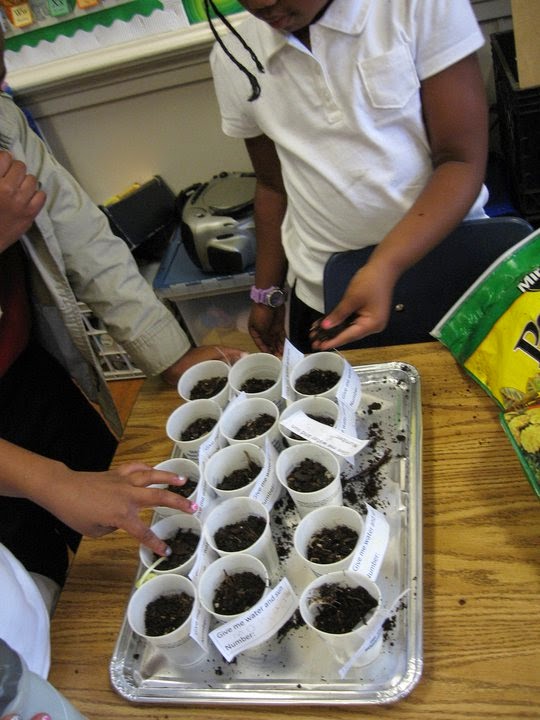 Those labels say what we were going to do with them: put them in the dark or sunlight, water or no water.

These beans did really well! One plant even survived long enough to make a few beans of its own, right there in my classroom. We concluded that beans were magic.

One thing I was really surprised by was when I asked the kids to tell what we had done for the bulletin board. I asked, what was the first thing that happened? And Jamarrion (not his real name) said that the first thing that happened was that I told them about Jack and the Beanstalk. He didn't say that I told them a story or read them a book about Jack and the Beanstalk, but that I "told them about Jack," implying that the story had really happened. That was my favorite part of this whole lesson. 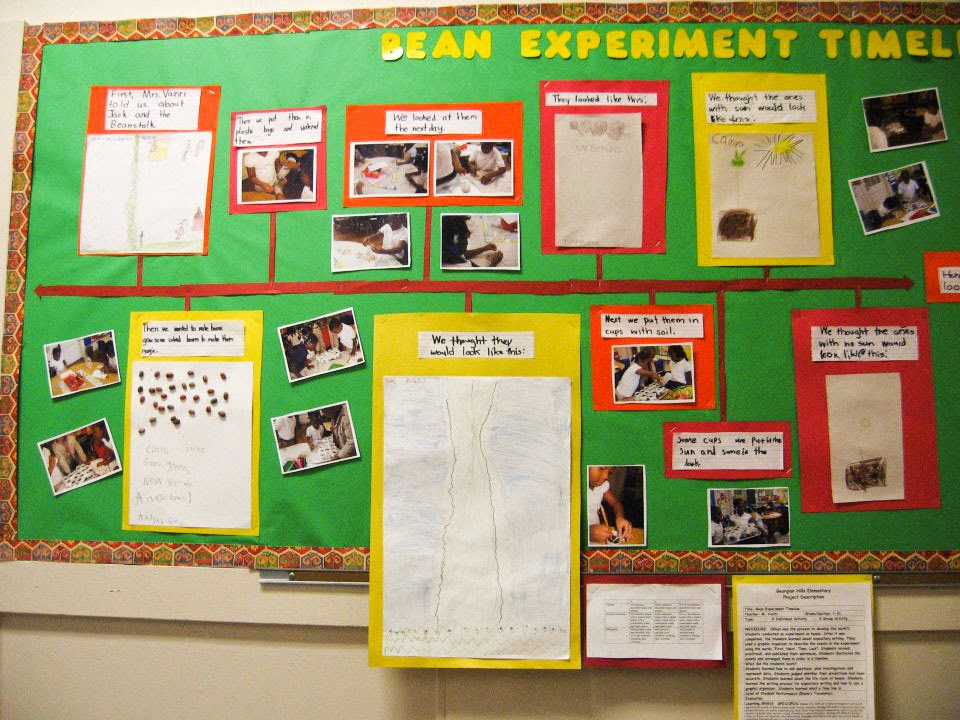 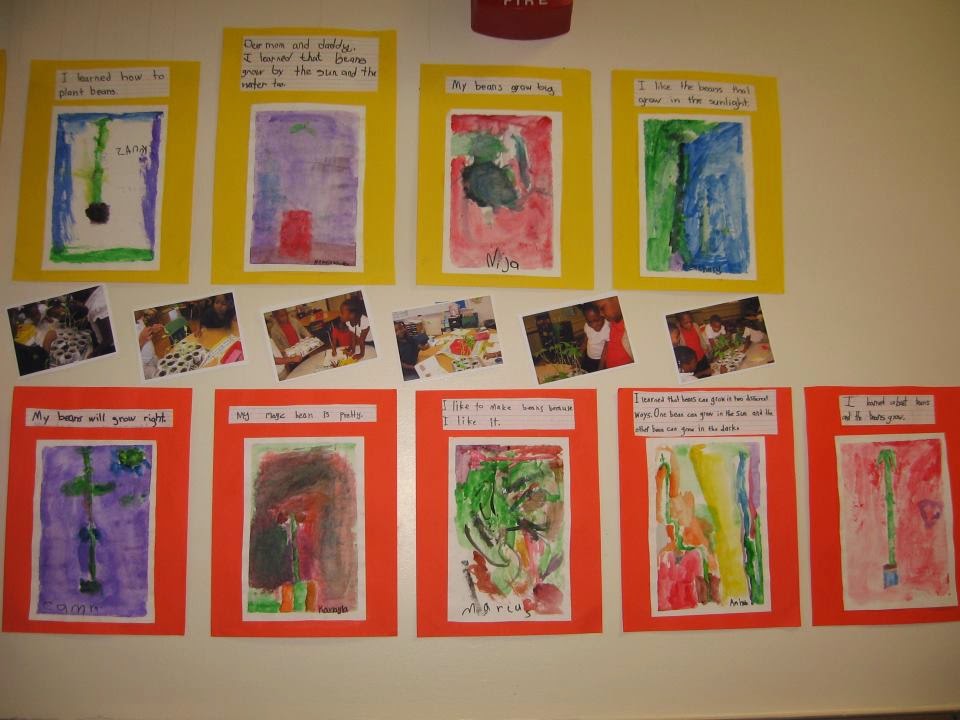 Later, we planted these sunflowers: 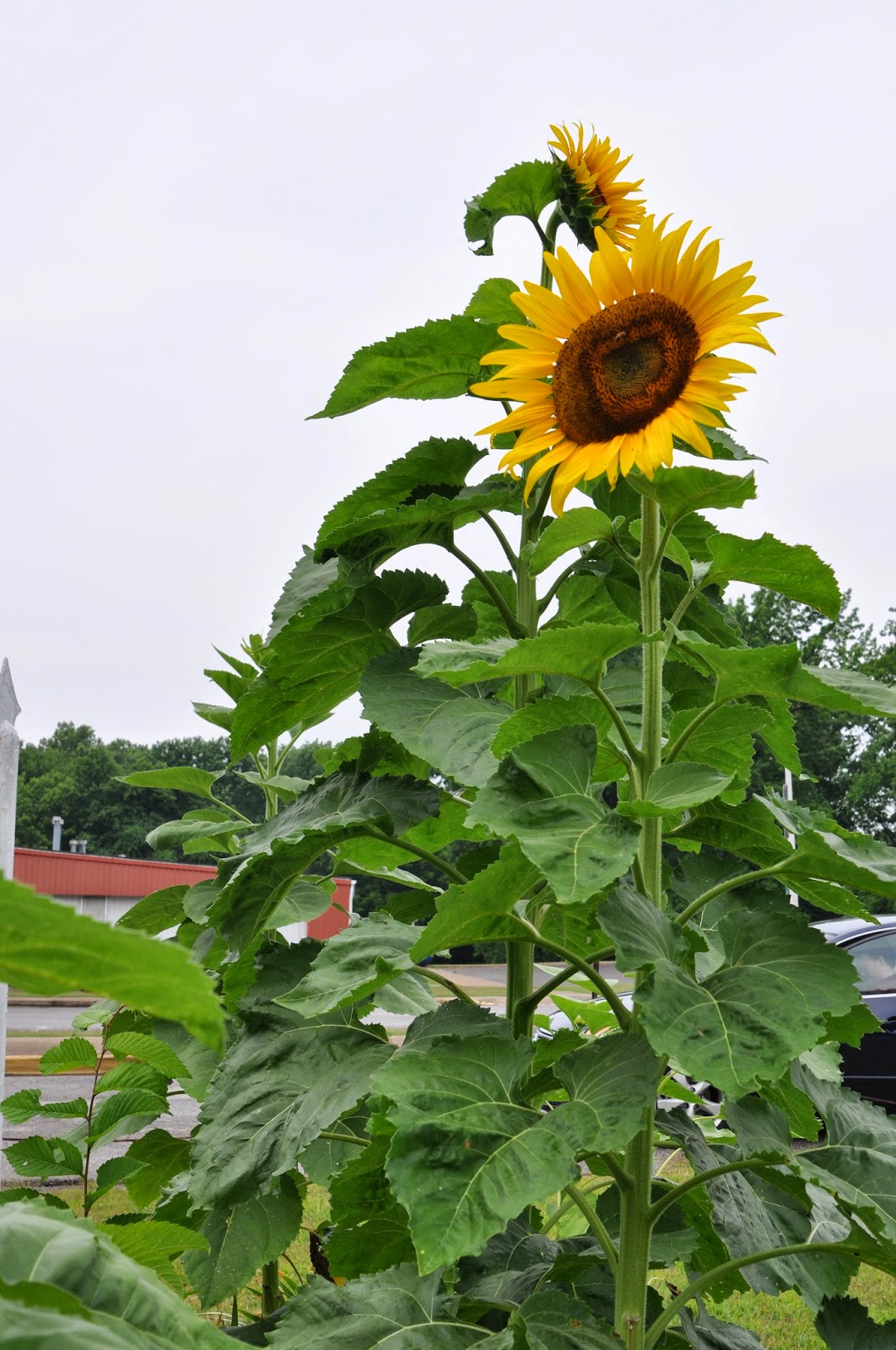 It was incredibly fun, and the kids learned a lot.

Here's how to start:
Before spring break, I told the class to predict what would happen to the sunflower seeds if we planted them in cups. The kids drew pictures of what they thought might happen. Then I got out the potting soil and we planted two seeds each (in different cups).

Note to Teacher: Be sure you plant extra for the ones that the kids will break later... you don't want anyone to be without a sunflower.

Over spring break, I took the plants home to keep them watered. When we returned to school, we went to the front and planted them in the small flower bed by the school sign - a place with lots of sunlight. I kept telling the kids how important it was for our flowers to get lots of light (reminding them of our bean experiment earlier in the year, where the darkened seedlings were spindly and unhealthy).

So kids love to play around with seedlings. They broke most of them and I was glad I had planted my own batch of sunflowers at home at the same time.

We also neglected to think of the landscaping people who come to the public schools once a month and cut grass. They cut down our flowers! I had to bring more of my own, and also we were reduced to one sunflower for every two students (they had to share). After that, I had them make the signs you see below, which say "Please don't cut our sunflowers!" They wanted to just write the words, but I told them to draw pictures too, because maybe some of the grass-mowers couldn't read. They were shocked that I thought there might be adults who couldn't read and said, "Why don't they just get their moms to read it to them?" In any case, they thought of innovative ways to express their idea visually. (And I hope it made them decide to be readers when they grew up!) 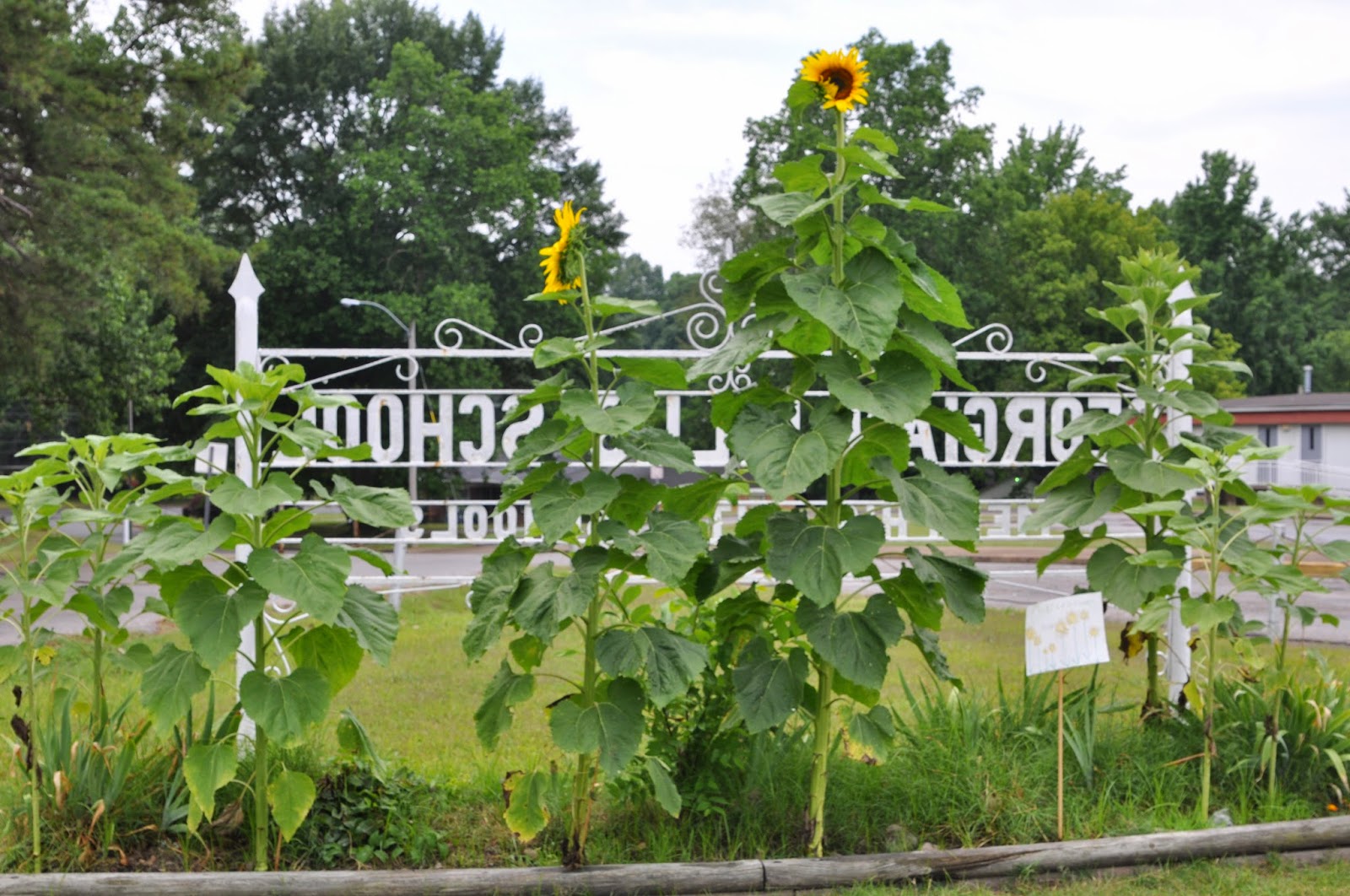 The major problem with growing these was there was not a water hose. According to the building engineer, there was not even a faucet in the front of the building that I could bring my own hose and attach to. This area was on the other side of the driveway. Here's an aerial: 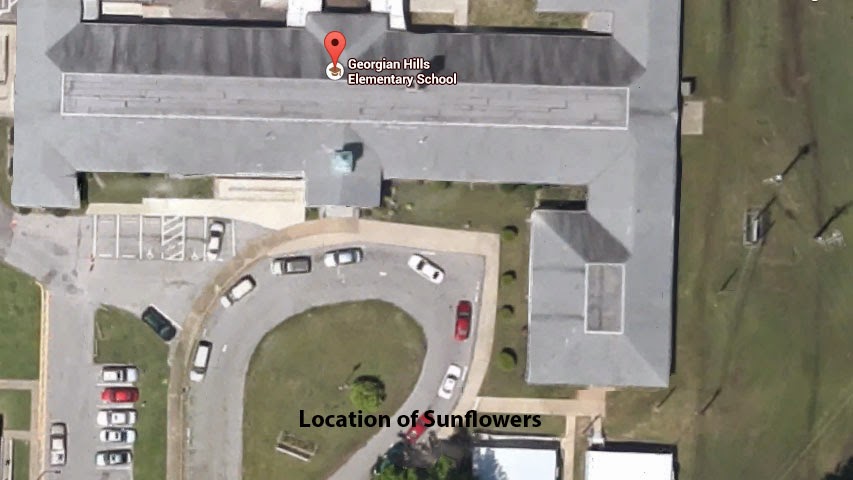 So not only did I have to fill up several milk jugs everyday, I also had to teach the kids how to cross the street (which is what I called it, even though it was only a driveway). Luckily, that's an important skill to learn (we used the "hold your partner's hand" method).

The kids helped immensely by filling up the milk jugs in the water fountain (school sinks are too shallow to use for this purpose it turns out) and carrying them out. To save time, we went to the restroom after lunch, and those who finished first were assigned to fill up jugs (this took quite a while with the measly stream from the water fountain). And then we went directly out the front door to water our flowers before walking along the side of the building to go to recess. (I hate wasting children's time walking through hallways).

So we had to do this every single day. Sunflowers are very thirsty. We also took out clipboards with graph paper on them, measuring tape, and pencils, and measured our sunflowers at least once a week. They grew very quickly, as you can see below! 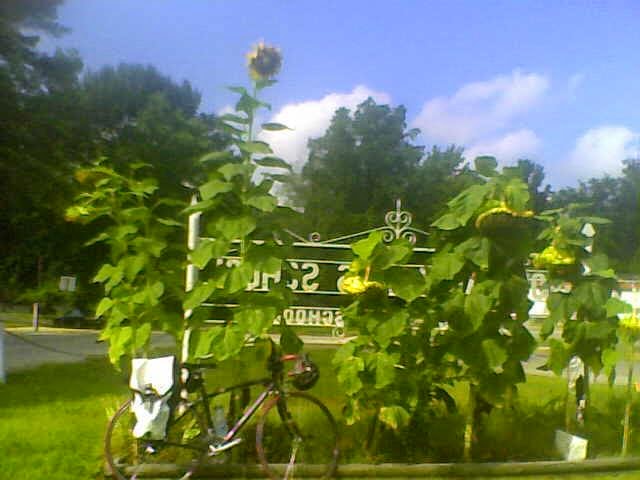 The only problem was that they did not get this big by the time school ended. In fact, I had to go out to the school every other day over the summer and water them myself (I had asked kids to sign up to do it, but I was extremely protective of these flowers...). I made it into a good experience for me by not driving (I hate driving) but bicycling out there -- so that's why you have the nice image of my bike leaning on the sunflower to give a sense of scale.

The next year my principal asked me not to plant sunflowers in this flower bed for aesthetic reasons, and since there was no other place that would be safe from grass mowers and in full sunlight, I didn't do this again. (But when we were cleaning up the flower bed with some volunteers the next spring, I did find one sunflower growing wild and left it alone!)
Posted by Unknown at 10:59 AM