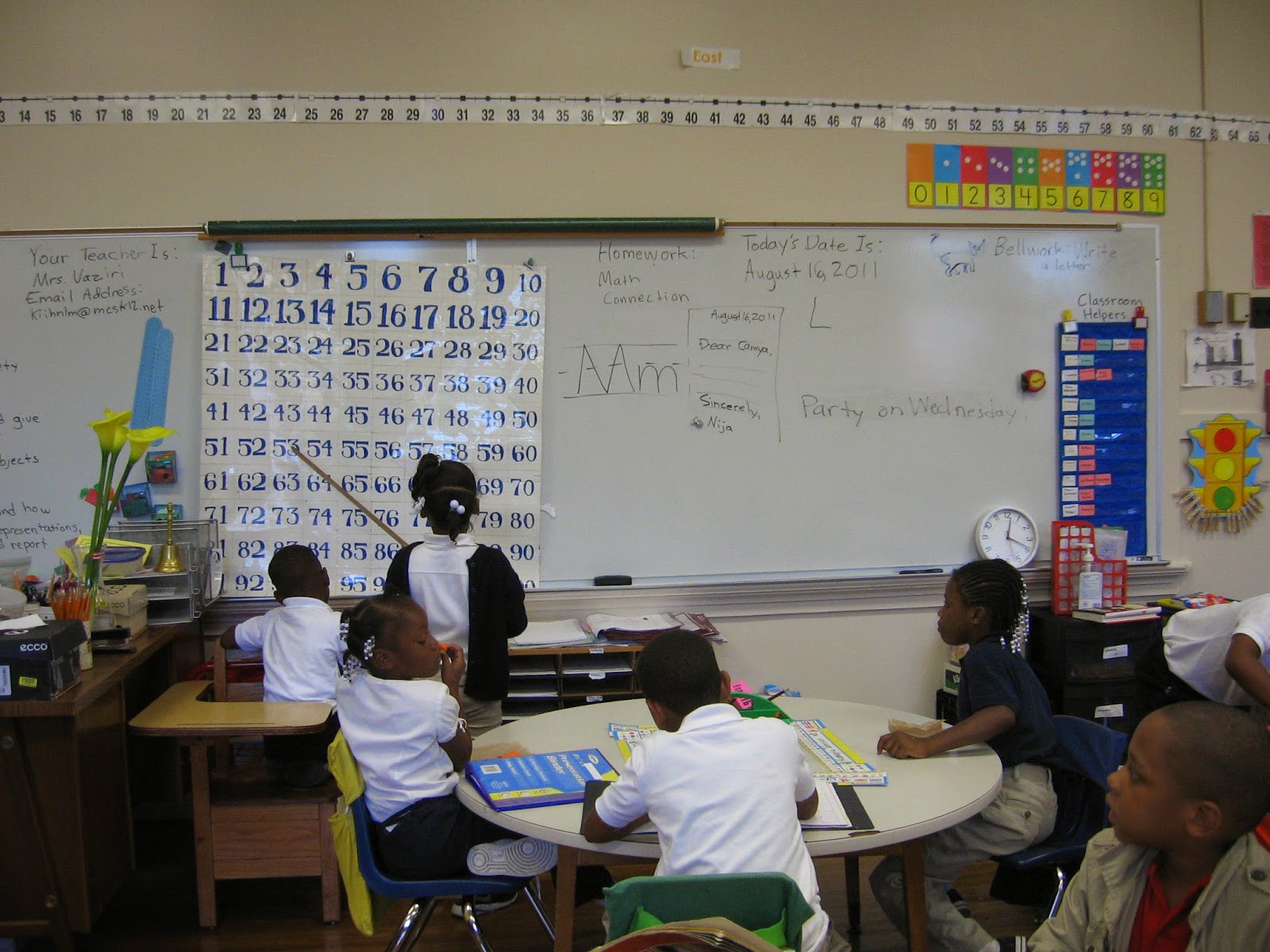 Here you can see one of the aspects of my classroom I loved the most: my giant hundred chart.

Most teachers have a hundred chart in their room that is a quarter the size of this one. During student teaching, I watched the students count with the teacher on it before each math lesson. I thought this was a great ritual; however, I noticed that the students couldn't actually see the numbers. So I bought four poster boards, taped them together at the back, cut them off to make them into a large square, and drew a grid of 100 squares on it. Then I got stencils (or, actually, I made my own stencils) and wrote the numbers 1-100 on it. Next, (and this was the time consuming part) I carefully "laminated" it by using packing tape. The poster was too big to be put in a traditional laminator.

My students loved my hundred chart. I did a lot of things with it. At the beginning of the year, I would pick a student to point to each number while the class counted. Later, I would pick a different student to count backward from 100. I added counting by 2s, 3s, 5s, 10s, always picking a different student for each type of skip counting. I also tried letting the person I picked choose the next student (from someone who had been paying attention and counting), using a can of popsicle sticks with the students' numbers on it to choose randomly. This was just a five-minute ritual we would do at the beginning of every math lesson. If I forgot to do it, someone would remind me, "Mrs. Vaziri, you forgot to count!" - probably because they hoped I would choose them to point.

Later in the year, I also demonstrated adding and subtracting using the hundred chart. It is laminated, so, to do the addition 5+7, I would circle 5. Then I would point to 6 and tell them to start counting. "One," they said. I pointed to 7, "two," pointed to 8, "three," and when we got to where they said "seven," I had someone call out "STOP!" and I was pointing to 12. Then I would circle 12 and write that down as the answer. I'm a visual person myself, so I'm sure my visual learners benefited from having addition shown to them in this way. (It is also auditory). And I loved feeling like we were solving a problem together - I really depended on that person to yell, "STOP" because without them I would often forget what we were doing and just keep counting.

I gave them blank hundred charts and had them copy it down (I also gave them individual hundred charts). When they finished copying it (which was quite an undertaking and quite an accomplishment!) I made a big deal of it and laminated it so they could follow along when we did addition problems on their personal chart (they had dry erase markers at their tables).

But what I most liked was sometimes when kids were between things to do, I would catch them just sitting at their seats and counting on the hundred chart, for fun. Or if I asked them a question, 6+8, they would turn around in their chair and look at the hundred chart to answer (even though they had their own little one in their notebook). That's how I know they loved my giant hundred chart.
Posted by Unknown at 7:17 AM