Interesting group at Republic Coffee just now. They were playing a spirited game of "Would You Rather..?" 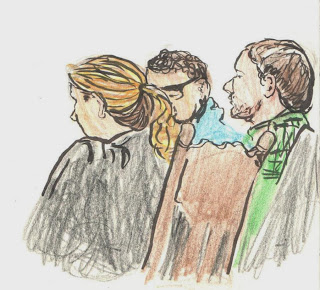 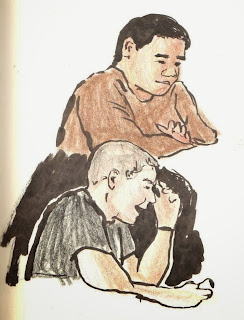 In other news, I had the most wonderful weekend. I spent almost all of it reading a novel (Wuthering Heights). I didn't know until a recent wikipedia binge that the well water (and only available water) for the Brontë family was contaminated by decomposing corpses. The life expectancy of the area where they lived was less than 25 years, so it wouldn't have seemed unusual to the other villagers that all of the siblings died young.

Here's a picture of Emily Brontë (author of Wuthering Heights) painted by her brother: 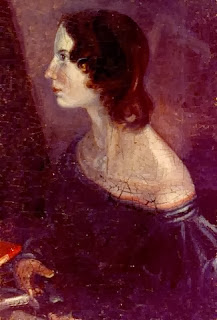 She was thirty when she died.

Although it has its downsides (very long, but of course I like that), there are a lot of marks of genius in it: A perfect depiction of what bad people we are as children, greedy and cruel, especially to siblings. But, eventually, every adult in the novel grows out of that, except, of course, Heathcliff. Her characterization of a popular, pretty, and tyrannical teenage girl (Catherine Earnshaw) is spot-on. And I was incensed again, just as I was the first time I read it, at the way the wimp Linton talked about Cathy. Some credit has to be given to a writer that can make you wish you could slap a fictional character.

Mr. Lockwood, the narrator, happens upon some books with notes in them written long ago (25 years ago). So when I re-read it, I imagined finding notes written in 1988.

I'm looking for another book to read, or to re-read, in the same obsessive manner I read this one, but it's probably better that I don't have one yet. I want to get a lot of painting done this week.