I just attended a "Munch and Learn" lecture by Haley Morris-Cafiero (whose portrait I'm working on!).

I asked her about the relation of her work to typology, such as the typology of the work of Bernd and Hilla Becher. 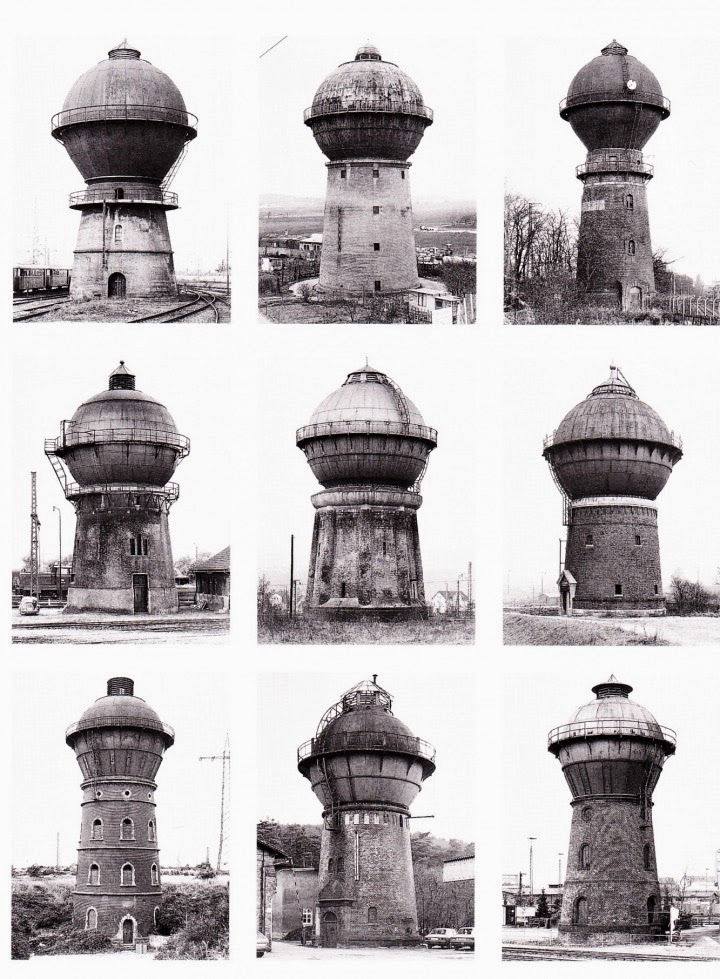 "A fascinating aspect of the seriality of the resulting images is - beyond the insistence of repetition - the powerful emphasis of individual forms in the larger context. So much so that the exercise evokes a certain othering of these commonplace structures in very much the same way that repeating a word over and over makes us aware of the innate 'strangeness' we never knew it embodied."

In answer to my question at the lecture, she told us she doesn't really see her work as belonging to the field of typology, and I agree that it can't be classified as typology of a particular image or of a particular scene. But I wonder if you can't photograph a typology of a concept, typology of an idea, and when viewed in this way I think her work really begins to come into its own. Look at the photographs: they seem to give you a global concept of how a human being (and in this case a particular human being) is viewed by the world. I can't tell you exactly what I mean by this, because the way she is viewed by the world can't really be pinned down into words -- but that's the beauty of typology, I think, and visual art in general, that it gets at what can't be put into words.


Now, I wonder how the art concept of typology relates to personality typing? I would say it doesn't relate, because rather than presenting a group of people of a type and allowing the reader to draw her own conclusions, it gets very specific about the traits of each type. I would say this, if what is written about the MBTI types weren't so scarily accurate. It actually says that people like me are on a constant search for "Truth" and that we believe in absolute Truth.

"People with the INTP personality type are global thinkers. They see everything as one giant Entity that is connected, and seek knowledge about that Entity. They constantly seek the Truth, and have ultimate respect for the Truth...Once they have reached a conclusion, or discovered a Truth, they are *very* particular about the way that Truth is expressed and understood. "

Remember when I said, "These thoughts are notoriously hard to communicate and writings about Truth have been famously misconstrued (to mean exactly the opposite of their intended meaning, in fact)"? Yeah...

I don't know if I've ever been more baffled by anything in my life.
Posted by Unknown at 3:23 PM